Day 136 - A month of putting my head down and shipping 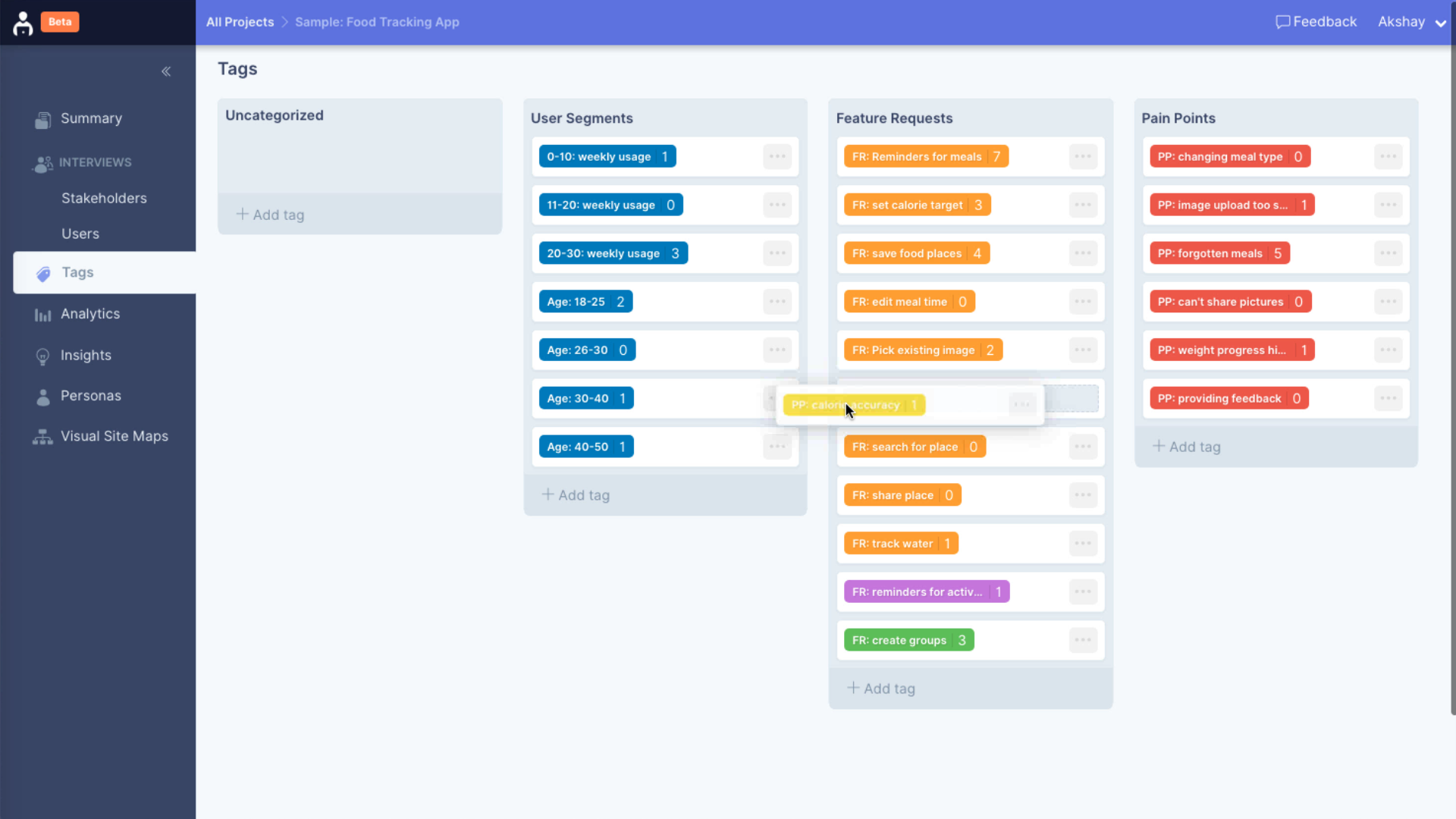 After the launch I went into learning mode for the first week. I was simply observing how people are using UserBit, where they are getting confused and which features they are coming back for.

One of the first things I realized was that the affinity diagram method of analyzing user interviews is not scalable. There were some teams that were interviewing 20+ people with 30+ questions. Creating an affinity diagram from this would simply be unreadable.

Moreover I got some requests from customers that made me think about a different way of analyzing text data at scale. If I could come up with a system of tagging text and use the frequency of the tags for analysis, I could then use the system at scale and still come up with meaningful analytics.

Building an annotation system would not be easy though. I’d have to come up with a customized editor that allows you to tag and store highlighted text in some sort of markup schema (I had no clue how to do this so I needed to research). Plus this would be a shift in the core infrastructure. It was a daunting thought.

At the same time, the I could clearly see the value it would provide. Tagging users, tagging research data and text. You could literally tag anything then perform analysis and answer questions like – rank tag B,C,D in frequency of how often they appear with A. In other words, answering questions like:

I put my head down and got to work

It took me two straight weeks of non-stop designing and coding to develop the tagging system. Here’s a demo video of the result: How to use tags for user interview analysis

Of course, I had to fix some issues etc but it seems to be working really well now and I am really proud of myself to have been able to implement this.

The next thing that majority of the people made pretty clear for me was that Research isn’t just interview driven. There are more forms of data and people want to user UserBit as a repository of all their research. Once tagging was implemented, I thought it was natural to allow people to not just be able to tag interview responses, but be able to create notes (for feedback, observations) and annotate them just like interviews. So shipped that out in a week.

Another thing that I observed was that one of the reason the onboarding experience is so bad on UserBit is because there’s a lot of information presented all at once. The sample project is getting more and more complicated and when you create a project there were 10 sidebar items that could clearly overwhelm you.

I thought about this quite a bit. I have to come up with a way to educate people about each feature on UserBit and somehow not overwhelm them at the same time.

I thought of coming up with a guide then sort of help text on each section. But I wasn’t happy with these solutions. Mostly because this reqiures users to get frustrated first and look for answers to find guides and help. But I don’t want people to get frustrated in the first place!

A good solution would make learning part of the workflow not a separate step. This is when I thought of modules. When creating a project you’d be presented with a set of modules to pick for your project. As you hover over them, you’ll learn a little bit about each module. Then you get to decide exactly which ones you want in your project.

I implemented that and immediately got some good response from the community. I’m very excited about this workflow.

So that’s what I’ve been upto the last 30 days. Working hard and shipping. I feel like UserBit is now in a good state. the core is solid and stable. I think I can now wear my marketing hat again and start socializing it.

Traction in general has slowed down a lot after the launch. This is partly by design because I don’t want a lot of people joining while I’m making fundamental changes to the platform. There are still 10+ people signing up everyday which is a good enough audience to test things out with for now. Revenue hasn’t grown much at all. Even though it isn’t my priority right now, something in the back of my mind is always worried about that. I need to get better at selling :/

I’ll try to write more regularly again, sorry for the gap… it was just a lot of work that needed to be done. :)